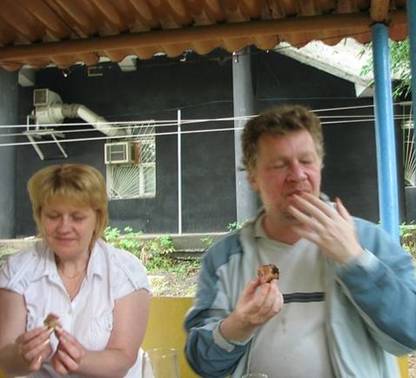 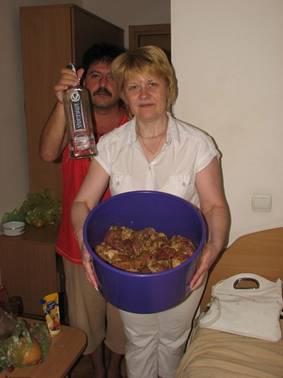 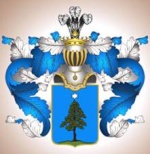 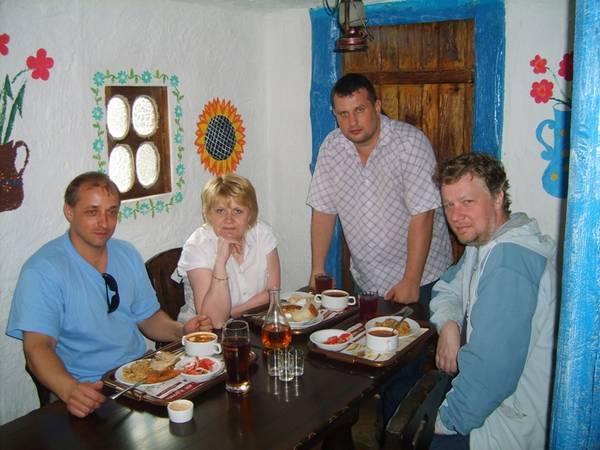 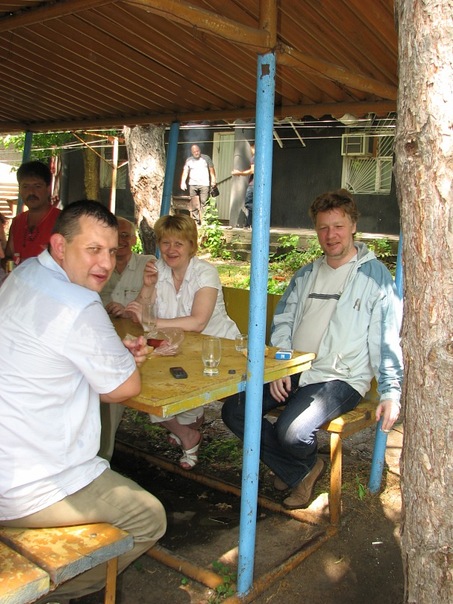 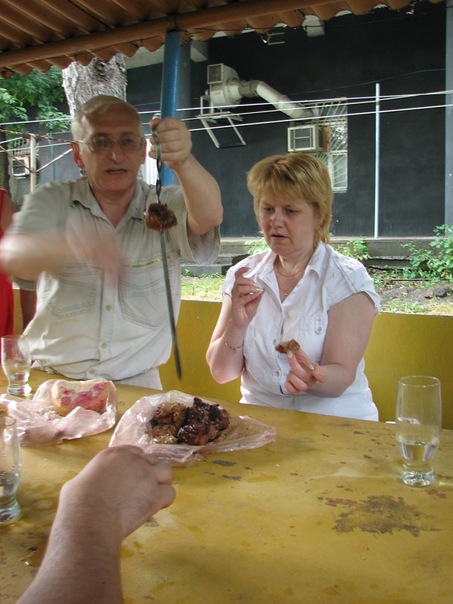 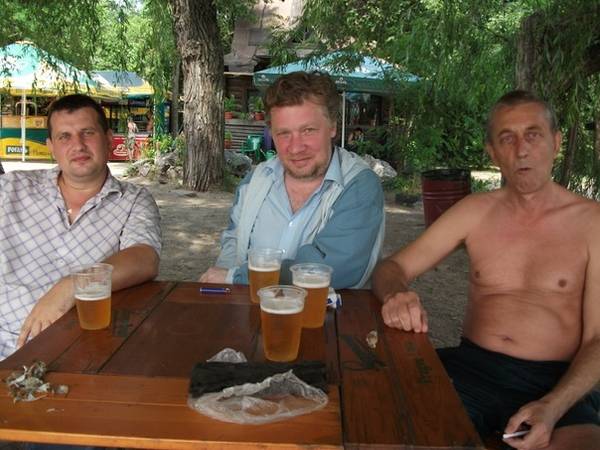 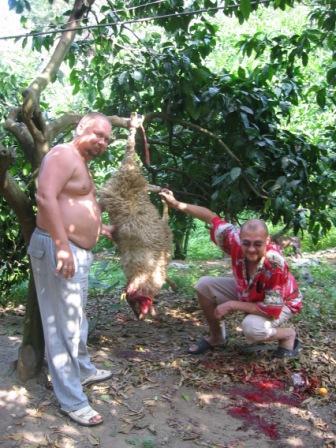 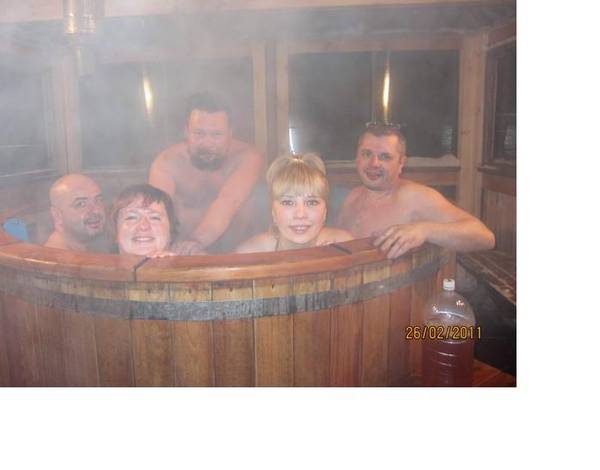 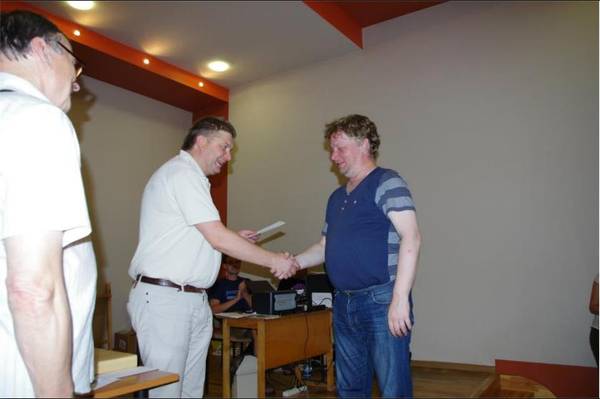 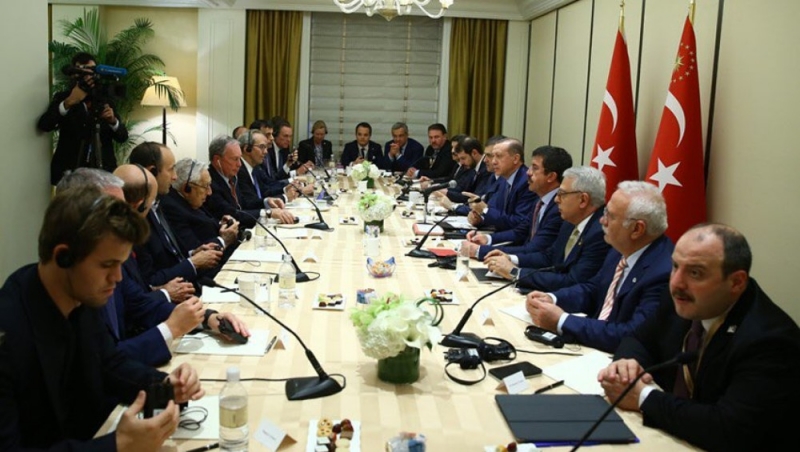 http://www.salon.com/2016/02/12/henry_kissingers_mad_and_illegal_bombing_what_you_need_to_know_about_his_real_history_and_why_the_sandersclinton_exchange_matters/
Friday, Feb 12, 2016 09:29 PM +0300
Henry Kissinger’s “mad and illegal” bombing:
What you need to know about his real history — and why the Sanders/Clinton exchange matters 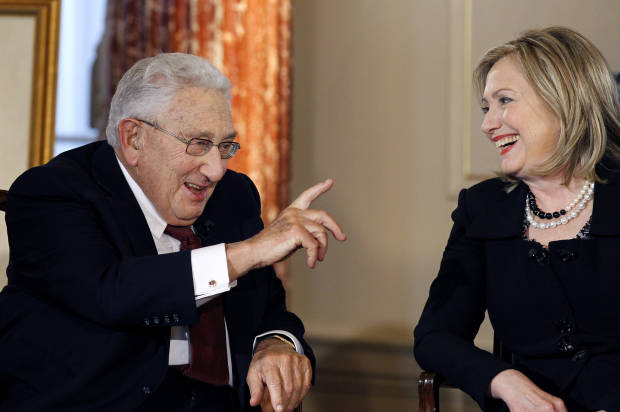 “I find it rather amazing,” Sanders said, “given that I happen to believe that Kissinger was one of the most destructive secretaries of state in the modern history of this country. I am proud to say that Henry Kissinger is not my friend. I will not take advice from Henry Kissinger.”

Maybe Kissinger will be the Dick Cheney of this campaign, angling for a shot at a dark-lord VP, you know, like Cheney himself. I doubt it. Though, at 92 and still a congenital publicity seeker, he must be enjoying himself.
In my most recent book, “Kissinger’s Shadow,” I tried to use Kissinger as a window onto both the collapse of the national security state, brought about by Vietnam, its reconstruction on new footings reading to meet the challenges of 1970s and beyond. It is in that reconstruction, in which Kissinger was key, that one can find the beginning of the militarization of the Persian Gulf – that is, the seeds sprouting the catastrophe we now find ourselves in.

As I wrote a few months ago for TomDispatch:

“Similarly, each of Kissinger’s Middle East initiatives has been disastrous in the long run. Just think about them from the vantage point of 2015: banking on despots, inflating the Shah, providing massive amounts of aid to security forces that tortured and terrorized democrats, pumping up the U.S. defense industry with recycled petrodollars and so spurring a Middle East arms race financed by high gas prices, emboldening Pakistan’s intelligence service, nurturing Islamic fundamentalism, playing Iran and the Kurds off against Iraq, and then Iraq and Iran off against the Kurds, and committing Washington to defending Israel’s occupation of Arab lands. Combined, they’ve helped bind the modern Middle East into a knot that even Alexander’s sword couldn’t sever.”

At last night’s debate, Bernie went on the offensive. He not only called Kissinger one of the most destructive secretaries of state in our modern history, he explained some of the history.

“In fact, Kissinger’s actions in Cambodia, when the United States bombed that country, over — through Prince Sihanouk, created the instability for Pol Pot and the Khmer Rouge to come in who then butchered some 3 million innocent people – one of the worst genocides in the history of the world.”

VIDEOSanders: "I led the opposition against the war in Iraq"

I have no doubt that the fact-checkers are going to mangle Sanders’ claims here, but he is pretty much right. Kissinger didn’t create the Khmer Rouge, but his mad and illegal bombing of Cambodia created the conditions where the most genocidal, militant faction of a broad and diverse insurgency could seize control of first the insurgency and then the state.

So for the sake of fact-checking Kissinger’s genocide in Cambodia for millennial supporters of Sanders, who weren’t yet alive when Kissinger was acting with his full power, here’s how I describe his responsibility in “Kissinger’s Shadow,” with the help of Ben Kiernan, a professor of history at Yale:

That Kissinger, along with Nixon, presided over the bombing of Cambodia, and had done so since March of 1969, is now well known. Less so is that the worst of his bombing started in February 1973, a month after Washington, Hanoi, and Saigon signed the Paris Peace accords. In 1972, the U.S. dropped, in total, 53,000 tons of bombs on Cambodia. Between February 8 and August 15, 1973, that number increased nearly fivefold and targeted not just enemy “sanctuaries” in the country’s east but the whole country.

In other words, Washington dropped the same amount of explosives on Cambodia in these six months as it did in the entire previous four years. Think of it as an accelerando climax to Nixon and Kissinger’s epic bombing opera. “We would rather err on the side of doing too much,” Kissinger said to his envoy in Cambodia the day after the escalation began, referring to the bombing, than too little. “I see no reason not to really whack the hell out of them in Cambodia,” Nixon said to Kissinger a few days later. 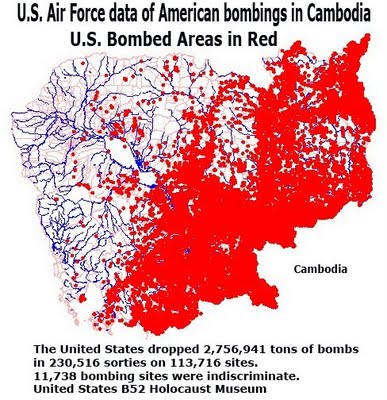 The nominal reason for this intensified bombing was the same as it ever was: to save face. Years of bombing had, as discussed earlier, created an untenable situation in the country, leading to a 1970 coup that, in turn, broadened the social base of the insurgency to include communists, “Sihanoukists” (supporters of deposed Prince Sihanouk (whom Sanders mentioned in the debate) and other non-communists. Nixon and Kissinger’s solution to this crisis caused by bombing was more bombing, including phosphorous explosives and cluster bombs that each released thousands of either ball bearings or darts. The assault was meant to force the insurgency to the bargaining table, or force North Vietnam or China to force the Cambodian insurgents to the table. And, as always, there were domestic calculations: bombing Cambodia might distract from the Watergate scandal. It didn’t. 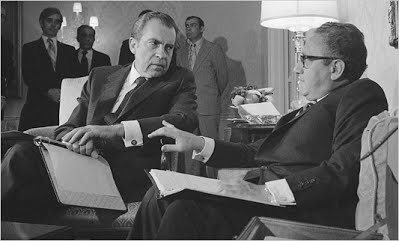 The historian Ben Kiernan calls this intensified phase of the bombing a “watershed in Kampuchean history.” Kiernan is now a professor of history at Yale University and head of its Genocide Studies Program. In the 1970s, he learned the Khmer language and interviewed hundreds of Cambodian refugees, including victims and former members of the Khmer Rouge. Based on those interviews, as well as extensive documentary research, including Air Force bombing data, he drew the following three conclusions:
First: The bombing caused “enormous losses” of Cambodian “life and property” on an almost unimaginable scale, across the country. The campaign was indiscriminate, with rural civilians the primary victims. As many as three million people were forced out of their homes during the war, almost half the country’s population. It’s impossible to read the testimonies taken by Kiernan and others and not be stunned: twenty people killed in one raid, thirty in another, entire families obliterated, hundreds of acres of crops scorched, whole villages destroyed. “They hit houses in Samrong,” one survivor recalls, “and thirty people were killed:” Another said that the “bombing was massive and devastating, and they just kept bombing more and more massively, so massively you couldn’t believe it, so that it engulfed the forests, engulfed the forests with bombs, with devastation.”

Second: The bombing was an effective recruitment tool for the Khmer Rouge. Propaganda doesn’t seem like quite the right word, since it implies some form of deception or manipulation. Object lesson might be a better description of the service Kissinger provided to Pol Pot. Here’s a former Khmer Rouge cadre describing the effect of the bombing:

The ordinary people sometimes literally shit in their pants when the big bombs and shells came. Their minds just froze up and they would wander around mute for three or four days. Terrified and half crazy, the people were ready to believe what they were told. It was because of their dissatisfaction with the bombing that they kept on co-operating with the Khmer Rouge, joining up with the Khmer Rouge, sending their children off to go with them . . . Sometimes the bombs fell and hit little children, and their fathers would be all for the Khmer Rouge.


Another told a journalist that his village, Pursat, had been destroyed by U.S. bombs, “killing 200 of its 350 inhabitants and propelling him into a career of violence and absolute loyalty” to the Khmer Rouge. One elderly woman said she had never met a “Khmer Rouge” until her village was destroyed. The propaganda was strategic but the fury and confusion real: “The people were very angry with the U.S., and that is why so many of them joined the Khmer communists,” reported one witness. Another said that after the bombs destroyed a number of monasteries, “people in our village were furious with the Americans; they did not know why the Americans had bombed them.” 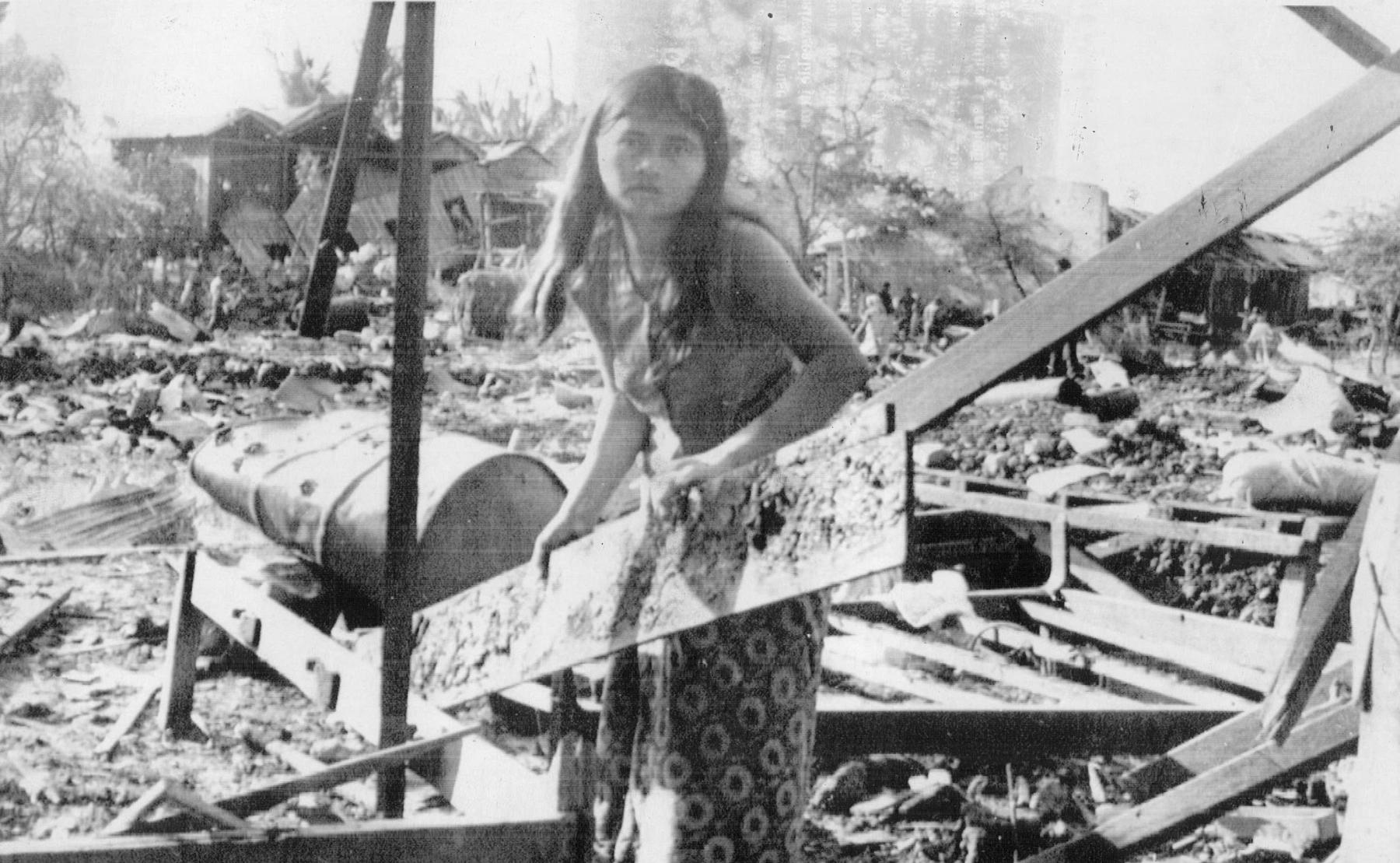 Third: The bombing that took place between February and August 1973 had two consequences: It delayed a Communist victory while at the same time radically transformed the nature of that victory when it did come two years later. Had Lon Nol fallen in early or mid-1973, the insurgent victors would have been comprised of diverse factions, including moderates and Sihanouk loyalists. By the time Lon Nol did fall in early 1975, not only had the Khmer Rouge come to dominate the insurgency but a radical faction had come to dominate the Khmer Rouge.

Nixon and Kissinger’s intensification of the bombing killed or scattered much of the anti- Lon Nol opposition, driving the insurgency into siege mode and giving the upper hand to a hardened corps of extremists circling around Pol Pot. The bombing sanctioned their extremism: when political-education cadre pointed to charred corpses and limbless children and said this was a “manifestation of simple American barbarism,” who could disagree? And it made them even more extreme: in the villages, “people were made angry by the bombing and went to join the revolution,” and so it followed that those who didn’t join the revolution were “CIA agents” and targeted for reprisal. The destruction of the countryside also brought out a “revival of national chauvinism,” which included anger toward the Vietnamese for abandoning the struggle even as Cambodia was being devastated. Sihanouk supporters, Vietnamese, and other moderates were purged from opposition forces.

At the same time, the strain of living under constant bombardment forced those areas under Khmer Rouge rule into an accelerated program of peasant collectivization, justified by the demands of having to survive during wartime. Emerging from the carnage was fury directed not just at United States imperialism but at the capital “Phnom Penh,” the city as a symbol of decadent, urban and industrial modernity.

On April 17th, 1975, the Khmer Rouge took Phnom Penh, and Pol Pot declared “Year Zero.” His cadre immediately began to empty out the capital and other cities, deporting millions of urban dwellers to the country’s northwest. Cambodia’s new rulers targeted for persecution Buddhist monks, ethnic minorities, former government loyalists, intellectuals, moderate Communists, and anyone who would stand in the way of establishing their agrarian utopia. Nearly the entire population of Cambodia was forced into rural labor camps. By the time a now unified Vietnam invaded the country in 1979, overthrew the Khmer Rouge, and put an end to the madness, as many as two million people, perhaps more, had been killed – of starvation, exhaustion, disease, or murdered. 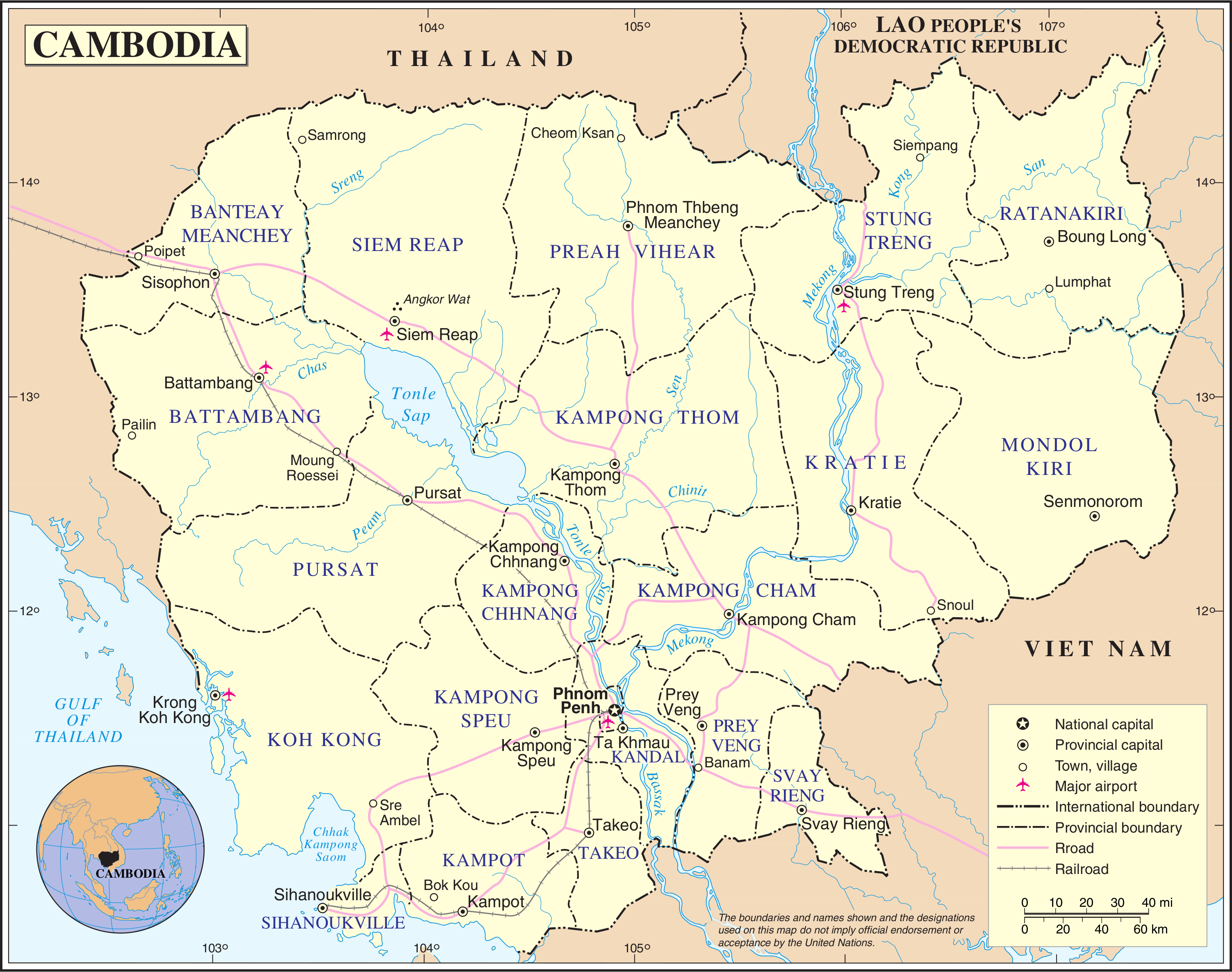 So, to sum up, using the lower estimates above: Kissinger’s policies resulted in at least 4,124,000 civilian deaths, probably many times that number of wounded and refugees – and that doesn’t include Kissinger’s victims in Vietnam — a war that he (and Nixon) helped prolong for five years when they sabotaged 1968 peace talks — Laos, or Argentina, Uruguay, the Middle East and Persian Gulf, at the hands of Kissinger’s partners, such as the Shah and the Saudis...